In early May, main food prices rose by 60% 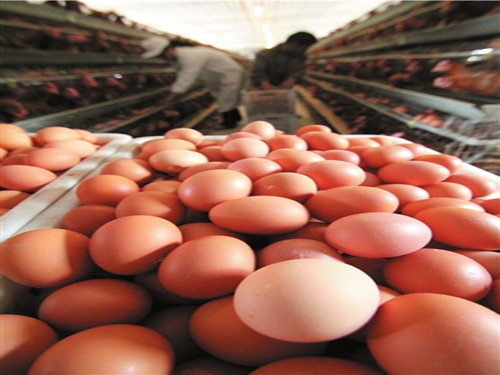 Yesterday, at a layer chicken farm in Luancheng County, Linyi City, Shandong Province, workers picked eggs. According to the Xinhua News Agency's national agricultural and sideline products and agricultural materials price system monitoring, since the middle and late April, the national egg price has changed a steady trend in previous years, showing a slight increase. Compared to April 18 and April 18, the national average daily egg price rose by 5.2%, which was 23.8% higher than the price of 3.78 yuan per catty on May 15, 2010. According to data from the National Bureau of Statistics, the range of price-enhancing foods expanded in early May, and some vegetables were re-rising. Xinhua News Agency Released 60% of Main Food Prices in Early May Increases Prices of Some Vegetables Regained Rising News (Reporter Ma Wenting) The National Bureau of Statistics released yesterday the â€œaverage price changes of major foods in 50 citiesâ€ showing that the main food prices in early May The range of increase was wider than that in late April, and the prices of vegetables that fell in three successive rounds all changed. Some vegetable prices rose slightly.

Specifically, the foods in the first three months of decline in early May were: 10.3% fall in beans (currently, beans have been ranked in the top three food groups for four consecutive periods), bananas have fallen by 4.3%, cucumbers have fallen by 4.2%, and the top three have risen. The food was: rape rose 5%, live salmon rose 3.4%, and eggs rose 2.5%.

Recently, the rapid decline in the wholesale prices of vegetables in Beijing, Shandong, and Henan has caused concern. The Ministry of Commerce has deployed emergency measures to stabilize the vegetable market. The data released yesterday by the National Bureau of Statistics also showed that vegetable prices have gradually stabilized.

Analysts pointed out that the current change in the price of vegetables is only a short-term change and remains to be further observed. However, considering the early decline, the rise in some of the vegetable prices is a reasonable rebound from the previous price decline. For example, cabbage prices, celery, etc., whose prices have fallen to the bottom in the previous period, and some leafy vegetables are due to the impact of spring drought. The decrease in the supply of vegetables.

The above-mentioned sources stated that the rebound in vegetable prices is favorable to the production and sales of vegetables in the market. It is expected that there will be limited room for vegetable price fluctuations in the afternoon market, and the overall decline will continue in the short-term due to seasonal factors.

Interpretation of May and June CPI may climb Cui Wang, chief economist of UBS Securities in China, said that CPI food is dominant and food prices are rising, so the CPI in May and June is likely to rise. It is expected that the CPI will exceed 5.5% in June and reach the year's high.

CITIC Securities issued a report yesterday, pointing out that the current market expectations for CPI to hit a new high in the second quarter are still very strong. Among them, in addition to tail-flipping factors, market concerns also come from three aspects: First, there are signs that inflationary pressure has shifted from food to non-food sectors; second, prices of vegetables and other foods may be affected by adverse weather in the second quarter beyond expectations; Rising oil prices are still expected to be strong.

Wang Tao believes that since the CPI has not yet peaked, it means that the central bank will raise interest rates once in June. There will be a rate hike in July and August. The total interest rate increase rate is 50 basis points.