The radial arm maze experiment is also one of the most commonly used models for evaluating animal learning and memory, and was established by Olton et al in the mid-1970s. The basic basis is that the animals that control eating are driven by food to explore the arms of the maze; after a certain period of training, the animals can remember the spatial position of the food in the maze. The method can simultaneously measure the working memory and reference memory of the animal. Animals used include rats, mice and pigeons. This model is sensitive to brain damage and multiple drugs. The latter include ethanol, East ### (anticholinergics) and MK-801 (NMDA receptor antagonists) and the like.

Most of the experiments used an eight-arm radiation labyrinth, but also a twelve-arm or twenty-four-arm maze. Here is an eight-armed labyrinth produced by Shanghai Xinsoft Information Technology Co., Ltd. (). Each arm has a length of 41.9 cm, a width of 11.4 cm, and a height of 10.1 cm; it has a transparent cover thereon and two opposite photocells on each side. The central octagonal area of â€‹â€‹the labyrinth has a diameter of 27.4 cm; there is a transparent top cover. The entrance to the arms of the central area has a movable door for controlling the animal's access arms. The maze is connected to the computer. The photo tracking system can also be used instead of the photocell to record the animal's activity in the maze. There are some external hints (extramaze cues) in the room where the maze is placed. Animals can see these hints in the maze and use them for spatial localization. The experiment was carried out with rats or mice. 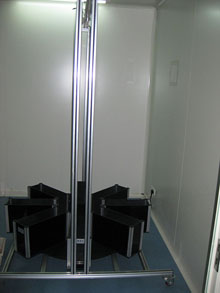 1. Animals were acclimated to the experimental environment for 1 week, weighed, and fasted for 24 hours. Thereafter, after the end of the daily training, the normal foodstuffs (16-20 g of the rats, 2-3 g of the mice according to the body weight) were restricted to maintain the body weight of 80% to 85% of the normal fed rats.

2. On the second day, the arms and the center of the labyrinth were separated by food particles (4 to 5 each, about 3 to 4 mm in diameter). Then, at the same time, 4 animals were placed in the middle of the maze (the door leading to each arm was opened). Let it freely ingest and explore for 10 minutes.

3. On the third day, repeat the training for the next day. This process allows animals to become familiar with the maze environment without strong stress.

4. On the fourth day, the animals were individually trained: one grain was placed at each of the arms near the outer food box to allow the animals to freely feed. The animals were taken out after eating or after 10 minutes.

5. On the fifth day, put the food in the food box and repeat the training of the previous day, twice a day.

6. After the sixth day, randomly select 4 arms, one for each arm; each arm door is closed, and the animal is placed in the middle of the maze; after 30s, the arm door is opened, allowing the animal to move freely in the maze and take in the grain. Until the animal has eaten all 4 arms of the grain. If the food has not been eaten after 10 minutes, the experiment is terminated. Train twice a day, with an interval of more than 1h.

Record the following four indicators: 1 working memory errors, that is, in the same training, the animal re-enters the arm that has eaten the grain; 2 reference memory errors, that is, the animal has never been eaten The arm of the granule; 3 the total number of arms into the arm; 4 test time, which is the time taken for the animal to eat all the granules. In addition, the computer can record the activity of the animal in the radial arm and in the central area, including the distance of movement and the time of exercise. If the working memory error of the five consecutive trainings is zero and the reference memory error is not more than one time, the drug test or brain core structure damage test can be started. Generally, the solvent (such as physiological saline) is given first, then the drugs that weaken the memory (such as East ~~~~MK-801, etc.) are added, and then the drugs for enhancing memory are added, and the dose is from low to high.

1. The mouse radial maze device and experimental procedure are similar to those of the rat, but the maze size should be 1/4~1/2 smaller than the rat maze, so as not to increase the difficulty of mouse behavior.

2. This experiment can also be used only to determine working memory. The only difference in the method is that the pellets are placed on all the radial arms instead of just four arms.

4. Even under restricted eating conditions, rats should be given a weekly weight gain of 5g to prevent the animal from getting sick due to malnutrition. Remove animals with poor physical condition.

5. Any item around the maze can be used by animals as a sign of space. Removing or moving these markers may make the animal difficult to operate and reduce the accuracy of the labyrinth arm selection.

6. The number of different labyrinth arms may vary depending on the purpose of the experiment, including the 8, 16, 24, 32, 40, and 48 arm maze. The less the labyrinth arm requires the animal to remember that the lesser the arm has been explored, the simpler the animal's behavior will be. Increasing the number of arms increases the requirement for spatial memory in animals on the one hand, and introduces more and more necessary interference factors (such as the impact of past maze learning on current measured memory). Therefore, the 8-arm radial maze is usually used to reduce unnecessary and excessive arm interference, and to shorten the time spent on training and testing.

7. The food used is usually small, chocolate-flavored (one of the animal's favorite flavors) or a sweet breakfast ring (10 mg each); liquid foods (such as chocolate milk or water) are also available. The latter is particularly useful for testing certain drugs that affect the swallowing of solid foods (such as East ###).

8. There are two main factors that affect animal maze operations: fear of the maze or observer and animal exploration habits and the driving of food known to be placed in the labyrinth arm. Excessive fear factors can prevent animal maze operations, leaving the animal to stay in a certain place in the maze without exploring. Lack of food cravings can produce similar results, increasing the stroking of animals and, if necessary, increasing the side walls of the labyrinth arms, helping to reduce animal fear. If the food is not driven enough, it can reduce the amount of food, but it must monitor both body weight and general physical condition. Usually, the body weight of rats should not be lower than 80% before fasting; for most rats, the body weight can be reduced by 15%.

For details, please refer to the website and our corporate blog blog.sina.com.cn/softmaze.

Be the first to register the "Xin Bio" forum: http://softmaze.5d6d.com, a forum for professional discussion of animal behavior pharmacology experiments.